In celebration of Father’s Day and family legacies everywhere, every Park Hyatt guestroom received a copy of Sons+Fathers, a book featuring first-hand accounts of father-son relationships from world-famous men including Hyatt Hotels Corporation Executive Chairman Tom Pritzker. In a similar style, our own Park Hyatt colleagues are sharing their own stories, advice, and recipes passed down from generations right here on HyattConnect.

Mr. Ashwini’s father with his son

Ashwini Kumar, general manager Park Hyatt Jeddah, learned the importance of giving and caring for others through by watching his father. He showed how the smallest acts can truly make all the difference.

“The most valuable lesson my father taught me is of giving and caring for others. One story is cemented in my beliefs forever. My father was admitted to hospital in India due to a heart attack, back in the 80s when heart surgery was not that advanced and available in all parts of India. I traveled to India and visited my father in a hospital where there were six or seven other heart patients admitted in a big room. When I asked him how he was feeling, he started telling me story of each and every patient, some young, some old. There was 17 year old boy who had a problem with his valve and came from a poor family. My father raised his pillow to show me the money he had collected for those patients from all his friends and relatives who had come to visit him in the hospital. His first question to me was how much I could spare. He was not worried about his health but was concerned for those less fortunate. He showed me that no matter how much wealth one can accumulate in life, happiness and fulfillment only comes in giving and caring for others.”

Andrew Davidson, general manager Park Hyatt Washington, has not only followed the advice and traditions his father passed down, he also shares them with the next generation. 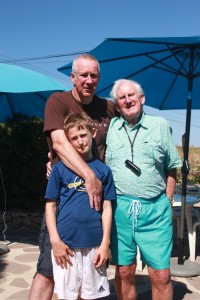 “My father lived by example, he always celebrated life’s accomplishments and valued hard work. My father started as a milk man in England and he ended his career working for a subsidiary of Unilever. I started in the industry as a dishwasher and have also come a long way since. It would not have been possible without the example he set, and his encouragement and support along the way.

As a child, my fondest memories of my father were out on our boat Dandy Jane. Even after 45 years, sailing is still my favorite thing to do – like father, like son. It was only fitting that when I went bare boating in the British Virgin Islands I would have my father join me. Much like my childhood, our toughest challenge on the trip would be finding our boat at night – especially after a long night savoring rummy dummies at Foxy’s on Jost Van Dyke. There must have been 150 yachts out on the water that night, and at 3 am they all looked exactly the same. We looked for the boat so long that the dingy ran out of gas! We still laugh about that night all the time – the memory of that night will last a lifetime.

Now that I live in Washington, D.C., I take trips to Annapolis with my son, Parker. Together we charter a small boat and create our own new memories. Like father, like son – it is where I am the happiest. Perhaps one day Parker will too.”

Ronald Kang and his father

Ronald Kang, general manager of Park Hyatt Beijing and Area Vice President, attributes much of his success to the advice his father gave to him. His advice has steered him along this 24-year journey at Hyatt.

“As a child, my father has always taught me that hard work does pay off, to believe, and to work for what I want for myself.”

If you missed other stories, take a read of Park Hyatt colleagues who got into the hotel business based on experiences with their fathers.