One of Hyatt’s own has made it to the finals of the Global Chefs Challenge, one of the most prestigious competitions in the culinary world.

Narae Kim, a colleague at Grand Hyatt Seoul, competed at the semi-finals in the pastry category of the competition, which took place in Bangkok from May 22 to May 25. In just six and a half hours, Narae created a delectable pastry dessert that will now take her to the finals.

The pastry category, known as the Global Pastry Chef Competition, is organized by Worldchefs, a global network that represents 10 million chefs in over 100 countries worldwide. 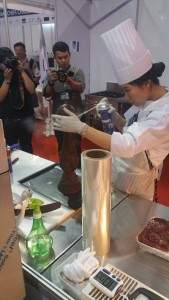 Narae compared the Global Pastry Chef Competition to a fashion show to display the modern trends of pastry-making. She won the gold medal in the ‘Plated Dessert and Chocolate and Sugar Showpiece’ category. “I love to work and create desserts and pastries. During a competition, the exciting thing is that I have to create something according to a ‘theme’ under a time constraint,” Kim said.

The entire competition takes place over a span of two years, and now that Narae has won at the semi-finals, she will get to take her talents to Athens, Greece in 2016.

Narae’s love for pastry-making started back as young as she can remember, but her real passion was sparked after she started attending pastry classes.

“I come from a small city two hours out of Seoul, where there is very limited pastry shops or Western desserts available. I used to watch my mother, who occasionally prepared Western cakes. During this time, I would enjoy playing with the left over dough, and molding some bunnies or bears out of it. Later in middle school, in my free time I would travel to Seoul where I joined a small pastry class and that’s where I fell in love with the industry.”

A big congratulations to Narae Kim and her accomplishments thus far! Be sure to wish her good luck for the ‘Grand Finale’ in Greece!